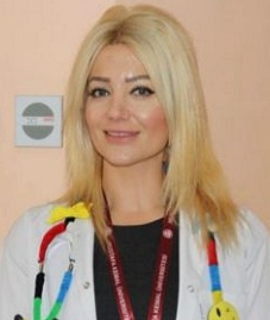 Familial Mediterranean Fever (FMF) is one of the 'Auto-Inflammatory Diseases' seen in childhood, which is characterized by recurrent episodes of fever, polyserositis, and skin rashes. FMF It is the first described, the most common, and the best known among autoinflammatory diseases. FMF is a disease of ethnic origin, It is a genetic disease encountered especially in communities living in settlements on the border of the 'Mediterranean Sea'.

Classical clinical features in FMF; It is in the form of recurrent attacks of fever and polyserositis (peritoneum, synovium, pleura, and rarely pericardium). The most common clinical presentation of the disease in pediatric practice is a combined attack with fever, abdominal pain, and/or joint symptoms. The duration of the attack constituting the FMF clinic usually lasts for 12 - 72 hours (often 3-4 days). However, longer or shorter duration of attacks may rarely be encountered. Also, the frequency of attacks can be variable. An important point to remember here is that the FMF attack does not recur at fixed intervals. The frequency of attacks may be 1-2/week, month, year, or less frequently. However, patients with FMF are completely normal in the period between attacks, because the disease is in the form of self-resolving acute inflammation attacks.

The use of colchicine is currently the only effective and safe method accepted worldwide in the treatment of FMF. However, it should not be forgotten that colchicine should be used regularly throughout life, in sufficient doses, without skipping doses, for both its therapeutic and anti-amyloidosis effects. Since it is a drug with long-term effects, taking it only during attacks instead of continuous use or changing the dose used during attacks will have no effect.

As a result; FMF, which is common in the whole world today, can be confused with many diseases due to its clinical features and causes a very tiring and costly process until diagnosis, should be kept in mind together with the clinical features. ?n addition, especially in terms of complications of amyloidosis, patients should be informed and colchicine treatment should be started without losing time.

Cigdem EL, born in November 15, 1981, in Turkey. She has done MD in 2005 at School of medicine. Since 2016, she has worked as Assistant Professor, and she is Education Trainer in the Mustafa Kemal University, School of Medicine.